The moment I saw that Cream City Yarns was going to have a class on knitting the Spud and Chloe Camp Hoodie I knew I had to take it. It has a technique that I’ve long wanted to learn but long dreaded: stranded colorwork. EEK!!! Me? Colorwork?? Me? Who recently found out that, after 40 years of knitting I’ve been doing it wrong?

That’s a story…. I took the Sock Class at Cream City Yarn to learn how to properly knit a sock. I’d made them, but they didn’t fit right and I always seemed to have a hole where the gussets joined the heel flap and I knew that wasn’t right.

So we were going on very well, knitting along the increases of the toe (I knit socks toe up using the Magic Loop technique), then knitting straight on the foot. More increases for the gussets, then a patch of straight knitting – back and forth, knit then purl. I was working on a knit row when the instructor perred at me for a moment and said softly in a horrified voice ‘Jude – you’re knitting through the back loops!’ And I’m like, “Um… yeah…’ (see I wasn’t exactly certain of what a back loop was…). So she explained to me why this was bad, then took a look at my knitting and found that, even though I was knitting through the back loops I was correcting my stitches in the purl row – so my stitches weren’t twisted as they should have been. Then she taught me the correct way to form my stitches.

So I was surprised that, after learning the correct way to knit and purl I still wanted to take classes. But having the instructor point out my error (and she did it in the nicest, most helpful way – totally non-threatening) just gave me the drive to learn it the correct way. No – not just LEARN how to do it, but to MASTER it.

And now, thanks to that gentle correction I’m fired up to learn stranded colorwork. Granted, it’s not a complex design, just 3 rows of a checkerboard pattern, but the technique is what I needed. I’d tried it before, but the fabric was so tight that it was unwearable. Now I wanted to learn how to do it right so that I could make a piece that would be not only beautiful, but wearable. 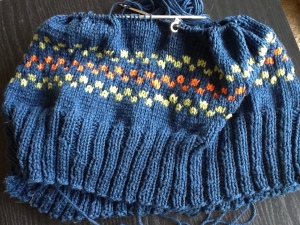 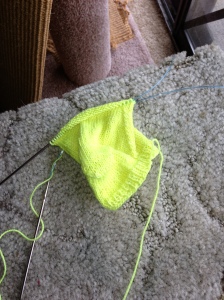 Does anybody remember these? Well Becky and I saw a pair at Cream City Yarn that just blew us away and so I decided to make a pair for her. I thought they had printed up the pattern for me, but I couldn’t find it. Turns out that it was listed on Ravelry from Purl Bee and it’s free!! Check it out: http://www.purlbee.com/the-purl-bee/2008/4/14/whits-knits-pom-pom-peds.html. So I proceeded to buy the yarn – Tosh Sock in a wild neon yellow-green. I love how fast these are working up. The author is right when she says you get to work on all the fun bits – the foot and heel!

It’s funny – a few short years ago – like maybe 2 I started knitting socks. Now I’ve been knitting for almost 30 years – never took a class – completely self-taught, but I always felt that socks were kind of beyond my skill to understand. All those needles (5 of them!) and such tiny sizes – size 2, size 1 size 00??? What the heck is a a size 00 even? Kitchener Stitch?? Whaaaat?

A couple years ago I heard a rumor that you could knit socks with a circular needle – one really long circular needle. And start at the toes!! See, that’s the beauty of the internet – you sometimes stumble across things you never knew existed. So I decided to give it a try.

I managed… sort of. I stopped by a local yarn shop during one of their stitch and bitch nights and a very kind lady there explained the process to me, helped me pick out a needle and showed me a really cool cast on. Then the night was over and I was on my own. I never went back – I could never make the hours work with my schedule, so I plowed through on my own. I made a couple pairs of socks – not great ones, but wearable.

In the course of the next 2 years I moved back here to Wisconsin and quit smoking. BAM! Just decided that I didn’t like the taste anymore and put them down. Consequently I had a lot of hours and nothing to do with my hands. It wasn’t that I wanted a cigarette especially – but I was BORED and I needed something to occupy my mind and my hands.

So I found a yarn shop here in WI that offers classes and that HOWDY – that was it. The real start of my passion for socks. I made 2 pair in class and so far 2 additional pairs. Now I feel much more secure in my sock-making skills.

Except for one thing: I found out that I knit backward! But that’s a story for another time….