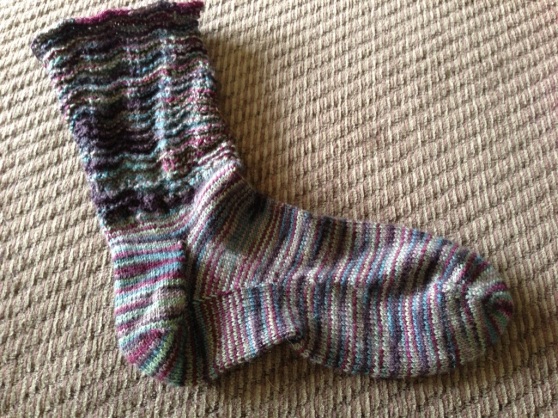 This is Lorna’s Laces Shepherd Sock yarn in a colorway called Christmas at Downton. Now, as I was a huge fan of the show up until the end of season 3 (SPOILER: they killed off my favorite character – I may not be back for season 4) I simply had to have a skein of this yarn. I have one skein of Lorna’s – a Solemate in Flamingo which I bought as part of a fund raiser for breast cancer research, so I’m familiar with the yarn. And this colorway really is evocative of the Christmas season in that grand pile.

The toe, foot and heel came off without a hitch. After a bit of practice at it I’m getting pretty fair at knitting socks – and fair warning you’re going to see a lot of socks here. I tend to knit my usual toe-up pattern then go wild with the cuffs. I look through my books to find a stitch pattern that I like, work out how many stitches I need and go – I knit the cuff until I have just enough yarn to do a super-stretchy bind off and done!

But, sometimes I have trouble making a stitch pattern work. That was he case with this one. I putzed and fussed and cursed and ripped back. Sometimes I had an extra stitch or two at the end of the round, sometimes I was short a stitch – I simply could not make this blessed pattern work! Now, normally I would just rip it back to right above the ankle (I leave about an inch above the heel before I start my pattern stitch) and would just do a plain rib, but this time I was determined to understand where I was going wrong. So, since I had to stop out to the yarn shop anyway to pick up a skein of Spud and Chloe sweater I took my book along to see if they would help me read the stitch. Sometimes, when another person reads the stitch they can see if there is a misprint in the book and I was beginning to wonder if this was the case here since I was doing everything I could think of, including counting the pattern out loud to the cats. I didn’t bring my work because I didn’t want that to bias the interpretation on the stitch pattern.

We poured over the pattern, counted it out, figured out the repeats, everything we could think of and it was written correctly. Using the number of stitches I was I should not have had any problems. I went home, thinking on the entire drive that there had to be something in the way I was working that was causing me to go wrong.

When I got home I gamely took up my needles and counted again and that’s when something that Lisa said struck me. She said “Well, since you’re working the magic loop method you have 36 stitches on each needle, which is half of 72 and also divisible by 9…” as she tapped on her calculator. But I didn’t have 36 stitches on each needle – I had something like 41 on one and 31 on the other or some such weird distribution – definitely not symmetrical. So I quickly shifted 5 stitches onto the other needle and began working and VOILA! SUCCESS! I couldn’t believe that something so simple was the root of my problem with a simple stitch pattern (it is k one row, p one row, k2tog [yo-k1 3 times, k2tog 3 times] k 1 row – that’s it). I felt alternately dumb as a box of rocks and grateful for the help I received. So I knitted away on that cuff finishing it up at about 2am – I couldn’t stop.

But that’s the wonderful thing about a local merchant. They take the time to help their customers. It’s all about customer service for them – and, since that’s my profession appreciate it probably more than a lot of people would. Visit a local yarn shop and see what I mean – you will never want to leave!